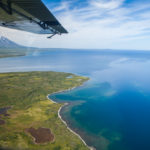 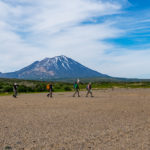 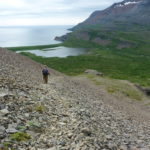 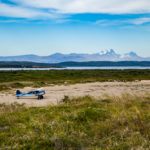 Enormous Becharof Lake covers approximately 300,000 acres. In the state of Alaska, only Lake Iliamna is bigger. Some six million sockeye salmon run here annually, supporting a wide range of wildlife. Dolly Varden char and Arctic grayling grow to impressive sizes on a salmon-rich diet, along with brown bears, cormorants, terns, and bald eagles. Several places around the lake are popular angling sites. The drainages feeding into the lake provide habitat for moose, caribou, nesting waterfowl and songbirds, small mammals, and other species in a rich matrix of vegetation types. Boating on the lake is uncommon, as access up the King Salmon River from Egegik is made challenging by rapids.

Peulik is a stratovolcano at 4,836 ft (1,474 m) elevation located to the south of Becharof Lake Its last eruption was in 1814. Peulik can be seen from vantage points in King Salmon, 55 miles away. Cone-shaped and capped with snow even in summer, this active volcano is younger than the Ugashik Caldera adjoining it. Surrounding the volcano are fields of old lava flows.

Very near to the Peulik Volcano are the Gas Rocks, emerging from the edge of Becharof Lake. Around the Rocks are bubbling torrents of carbon dioxide, easily visible on calm days, leaking up from deep cracks in the bedrock.

Between the Gas Rocks and Mt. Peulik lie two unusual craters: the Ukinrek Maars. Maars form when groundwater meets a hot spot in the earth and causes a steam eruption. For 11 days in 1977, plumes of steam and ash rose high over the Refuge. Today, the craters have cooled, leaving distinctive landmarks in a geologically active landscape.

Kanatak National Recreation Trail, designated in 2012, has been used for at least 2,000 years by Aleuts, Eskimos, Russian traders, gold rush explorers and most recently by subsistence users to cross the coastal mountains between Becharof Lake and the Pacific Ocean. Archaeologists have found evidence of villages on both sides of the pass, some repeatedly inhabited for centuries.

This beautiful, fine-gravel and sand-bottomed Creek flows from Mount Burls, near Peulik Volcano and flows 13 miles NE to Becharof Lake. Featherly offers exceptional fishing for Dolly Varden and Arctic Grayling along with magnificent views of Peulik Volcano.  The name Featherly Creek was reported in 1920 by G. C. Martin, U.S. Geological Survey (USGS), and on a map published in 1924 by S. R. Capps, U.S. Geological Survey (USGS).